I've run 14 Disneyland races to date, and I've got them down to a science.


That sounds more boring than intended.

I've run 14 Disneyland races to date, and I know how to ace the awesome experience meter.


Disney really does know how to put on an awesome race experience.  Everything is safe and organized, down to smallest detail.  If you haven't signed up for a Disney race yet, even if you're not a runner, you should go for it.

Here are seven tips to help you get the most out of your Disneyland race experience: 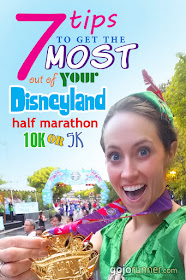 Put the registration time on your calendar and plan a way to get to a computer at that exact time, because these races fill up quickly -- especially the Disneyland Saturday races (10K & Kids Races).

I have legitimately seen these races fill up within 45 minutes.

If you haven't already done so, sign up for an Active.com account before registration.  Disney typically uses Active.com to manage race registration, so if you already have all your personal information in the system, registering is much easier.


Also, you won't be able to sign up other runners on your account unless they are minors, so have each adult in your group ready to register themselves.

If you're registering for the half marathon, you'll need to provide proof of time in order to be correctly assigned a corral, so have an up-to-date finish time from another half marathon on hand to type into registration.

Otherwise you may end up in the last corral, where the fastest you'll be able to weave will be at a 13-minute/mile pace.

Totally fine if that's your pace goal.  Not so fine if you're aiming for a 7:30.

#2. Plan Something Fun to Wear in Advance

Even if it's just a pair of mouse ears, sparkle skirt, or a Disney tech shirt -- you will not feel dumb wearing it, because others around you will have much bigger and brighter reasons to feel dumber than you.

Yesterday I dawned yet another new costume....

I don't feel quite girly enough to be a pixie, so I went for the little more masculine version...

If you want some ideas for future Disney costumes, check out my last entry, My Evolution of Disney Race Costumes, or search Pinterest.

I live 15 minutes away from Disneyland, and even though the race typically starts at 5:30am, I leave my house no later than 4:00am for 10Ks or 5Ks, and 3:30am for half marathons.

That gives me enough time to wait in parking and security check lines, and still have more than enough time to check a bag, use the bathroom, take some pre-race photos, dance to DJ Clark's music, watch the pre-race show, and walk to my corral without stressing or pulling my hair out.

Nothing messes up a race experience more quickly than nervously watching the clock tick closer to start time while you're still sixteen cars back from being able to pay for parking.

I suppose falling on your face during the race would actually mess up the race experience more quickly, but you get the idea.

Depending on which Disneyland race you sign up for, the walk from the holding area to the corrals could truthfully take you 20 minutes on top of the walk from your car and the other things you need to do, so plan accordingly.

Your pedometer will go up significantly on race days, even before and after you run. 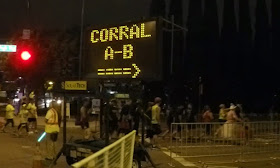 If you're staying at a hotel that offers a trustworthy shuttle that early (many neighboring hotels do) -- you'll save yourself a solid parking fee by taking it.  Just keep in mind that you'll still have to walk from the shuttle drop-off to the holding area, and then to the corrals.

Good news is, you'll be all warmed up for the race start!

If you're staying at the Disneyland Hotel, you are set for both race day and the expo.

Not only do you run through the parks and backstage areas, but there are music, lights, and character stops all along the in-park route = Plenty of photographic moments to capture on the way.

The character stops are themed to the race (example: BB8 is not going to show up during the Tinker Bell races), and they typically have lines to wait in, which grow in length as the corral letter increases.

And for the 5Ks?  They aren't even chip-timed.  So if you're running for time, that's between you and your Garmin.

I can tell you that while the top finishers of Disney races are crazy fast, almost everyone else isn't.

Since I've been lucky enough to collect a plethora of Disneyland photos over the years working and playing at Disneyland, I didn't stop for any photos at Saturday's 10K.

But more to say, "Hey, no one cares about running fast!!"

Lots of people even walk these races, as I did with a group of former Disney Ambassadors last year for the Disneyland 5K, and that's totally OK!  Even encouraged!

Listen -- even if you are terrified of the word "race" or the letter "K," you do not need to worry.  Many people don't exactly "run" these races at all, and those who do, typically just run for fun.

Anyone not trying to run for fun is kinda missing the point.

These people wake up super early and stand out in the cold, usually just to watch a single runner breeze past them in the blink of an eye.

And whenever you're running inside the park, the cast members (aka, Disneyland employees) are your spectators.

I have worked among them -- these are hard-working, heartfelt people -- some of whom are there, off the clock, just to cheer for you.

And if you engage them, you might just inspire one to join you next year.

Back in 2010, as a Disneyland cast member myself I "stage managed" 200 high school cheerleaders during a portion of the Disneyland Half Marathon route that runs by the Honda Center, and having never watched a race beyond the Olympics on TV, I was so inspired by each person who ran or walked by.

Now that I've converted to the crazy side, I personally run through and thank every person who is cheering, and smile and nod and those who are just staring.  If I come across a big group that isn't cheering, I playfully raise my arms until they get excited.  If I see a funny sign, I laugh and throw out a compliment.

It's all about the positivity.

Sure, their sign might be cheering for some guy named Steven, but as far as I'm concerned, it's cheering for me, too, because they woke up early to stand there and hold it while I was running by. I also thank the volunteers passing out water.  I thank the police officers.  Everyone there, paid or not, is awake earlier than they need to be, and I want to make sure they know I'm grateful for it.

The coolest thing is, you may think that engaging spectators may slow you down, but I've found that my pace increases after these interactions, because it raises the level of fun.

After finishing Saturday's 10K, I even had a few fellow runners come tell me it was fun and (somehow) inspiring to run near me.  One girl even asked to get her picture taken with me.

It's all about building a better experience for everyone.

If you are the kind of person who simply can't run without pumping your playlist, go right ahead.

But if you're open to it, especially during the Disney 5Ks or 10Ks, leave the headphones at home.

Most of your running will be inside the parks, where you're surrounded by music and a unique, five-senses atmosphere.

Well, 4 senses, unless you're licking poles along the way.

Which I don't recommend.

As a person who normally wears headphones during just about all of my races or training runs, I used to bring headphones to each Disney race too, but I found myself pausing the music constantly in order to enjoy the atmosphere.  During one race, I didn't turn my music on at all.

Now I just leave the headphones at home.

And I don't miss them.

The only exception would be during longer stretches outside the park during half marathons, where a little extra musical motivation doesn't hurt.  But even then, be prepared to pause your playlist when you run by the many high school bands, music performers, dancers, cheerleaders, and even classic car line-ups you'll come across, all there to cheer for you.

Trust me -- your headphones become obsolete as you run by cheering grandstands at Angel Stadium.

#7.  Cheer Through the Final Runner

Whenever possible, once you finish your race, pick up your medal, snacks, checked bag, have your picture taken, meet up with your friends and family, and then --

Head back to the race course sidelines to cheer for those behind you.

As the race progresses, I find that most spectators leave their post once their runner has passed by, so the sidelines or bleachers next to the finish line empty out, sometimes completely.

Honestly, I think the last runners are some of the most inspiring, and they deserve and need crowd support the most.  I may not be a crowd, but I can yell and clap pretty loud, and I love doing it for anyone who got their booty out of bed in the middle of the night to accomplish a healthy personal goal.

I usually check a bag with a couple jackets and a cowbell, so I can head back over to the finish line and ring that bell for others over the next couple hours.

It is truly almost as awesome as running the race all over again (in a good way).

Here's a seizure-inducing animated GIF to finish this off, courtesy of Google Photos: